How does it work? You’ve seen those ads for cellular telephones that can take and transmit pictures. People use them to photograph magazine pages, rather than buy the magazines.

FOLLOWING THE MARKETING STRATEGY pioneered by today’s mainstream conservative media and other highly successful public-relations schemes, my friends at Bear Basin Pack Trips recently approached me with an idea. Perhaps buying some journalism about their new Sand Dunes pack trips would be more effective than advertising.

THE CALLING UP of the National Guard this year, to support the war in Iraq, reminded me that 2003 is the centennial of another occasion in which the Guard was called up in Colorado: in the summer of 1903 Colorado’s troops were summoned for a war — against other Coloradans.

The occasion was a labor strike in the mining districts of Colorado, pitting emerging industrial organizations like the Western Federation of Miners and the United Mine Workers against the established power of industrial giants like the Rockefellers and Gug gen heims.

ARTIST SAUL STEINBERG, known for his cover illustrations for the New Yorker magazine, once described doodling as “the brooding of the mind.”

But for Salida artist Steve Flynn, doodling was the springboard for a style that integrates a variety of media with a wide range of subject matter to produce finely detailed work that runs the gamut from playful and whimsical to grippingly realistic.

ONE BENEFIT of the commercial dialect of modern American English is that it often consists of a string of buzzwords, and all you have to do to sound plausible, perhaps even intelligent, is string a few of them together: “Our commitment to diversity and sustainability is a vital component of our strategic visioning …”

The origins of many county names in Central Colorado are fairly obvious. Park County, for instance, is named for South Park, just as Lake County is named for Twin Lakes.

Those two were among the original 17 counties designated by the Territorial Assembly in 1861, as was Frémont County, which gets its name from John Charles Frémont, leader of four expeditions into the West in the 1840s and the first Republican candidate for the presidency of the United States in 1856.

JEROME BONAPARTE CHAFFEE — mining man, politician, businessman, mill man, banker, and one of Colorado’s first two senators — was a “mover and shaker” in the 1860s and ’70s. Yet he quickly receded into history after his death in March 1886.

It all depends on how you want to define a “general store,” but in this context, call it a “market that sells a variety of items, usually including gasoline, that is in the same building as the post office.”

The Twin Lakes Store fits, and so do several others in this part of the world. One is in nearby Granite on U.S. 24.

GENERAL STORES, those small, rural emporiums where you can buy a little of everything but not a lot of anything, are places where you catch up on local news, pick up the mail, and find out what’s biting. But they’ve been disappearing for decades, most replaced by look-alike, 24-hour convenience stores with brightly lit glass fronts, sanitized coffee counters, and minimum-wage clerks.

Guilty as charged, Charlie Green: oozing cynicism, defeatist prose, endless carping, flinging little resentful pellets of dung at the zookeeper … it’s my mantra, my rosary, my way of not embracing the real defeat. Too cynical even for the typographer, who changed “Bush Wasteland and Dunghill” into “Bush Wetland and Dunghill.” What other word but “defeated” describes a species which we agree has an exponential curve in weaponry but is stuck in a 4000-year rut of empire based on human sacrifice? What other words but “cynical and defeated” describe your notion that we’re victims of some calendar cycle, the same way some think we’re victims of externally-imposed sin?

I have enjoyed your magazine, especially the parts about water. I have often wondered who really owns the clouds, since they are continuously in motion.

In any event I had considered sending you firewood in lieu of the $20. My son owns a Terradome home of 5+ acres and has much wood to spare.

No one can claim that Saddam Hussein wasn’t a horrible man, but his (presumed — even that is now in doubt) removal leaves two questions unanswered:

It seems to me that there is a certain irony regarding two items appearing in the July, 2003 issue. One, Martha Quillen’s Letter from the Editors titled The Persistent Power of Myth, explores our tendency to view things not as they are, but as we are. The other, a letter to the editor by Dan Bishop of Saguache, is a perfect illustration of that concept. 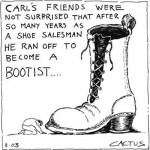 Water issues in the West could get even more complicated after a June 12 ruling by a federal appeals court in New Mexico.

The court upheld an earlier ruling that, as far as the federal government is concerned, the Endangered Species Act takes precedence over water-delivery contracts made by the U.S. Bureau of Reclamation.

Down to the Wire

Last minute news seemed to be the order of the day, as we approached our deadline on Monday, July 14. The evening news reported the first cases of West Nile virus in Colorado horses; hitherto the disease had only been detected in birds this season. And there were also several fires burning, including one in Saguache County, toward Gunnison.

One sensible tradition continues to be attacked by the one-size-fits-all globalizers.

That tradition is the siesta (sometimes called a “power nap” in yupscale America), and the current victims of the assault are in Portugal.

Several wildfires were burning as we went to press, including one near a rather obscure spot named “Dotsero.” That’s also the name of a jazz band which usually plays in Salida every fall, but there’s more to Dotsero’s lore.

While we like prairie dogs in general, we never thought of them as pets; one reason we keep cats is to discourage small rodents from making themselves at home here. But there are people who feel differently about prairie dogs, and now it appears the critters are spreading the monkey pox virus to humans.

Most of the recent session of our state legislature was devoted to budget-cutting. One result, thanks to reductions in funding for the courts, will be even lengthier litigation.

Another is that it will be more difficult to get a driver’s license in rural Colorado.

Ruth Marie Colville has died at age 99. The historian, teacher, writer, musician, and rancher influenced many in the San Luis Valley and is credited with bridging the gap between the white and Hispanic populations last century. Her works include La Vereda: A Trail through Time, one of the best books about the Valley’s history, and the founding of the SLV Historical Society.

You might note that Colorado Central looks a mite different this month. We thought it was time for a change. But if history is any indication, there might be some unexpected and unwanted alterations, too.

Since we don’t cover the entire globe, we’re not equipped to comment on “global warming.” But early July sure showed ample evidence of “Central Colorado Warm ing.”

ONE OF MY FAVORITE things about living in the West is driving the winding, two lane roads. But even if you can survive the sluggish RVs, washouts, rock slides and icy patches, now there’s a new traffic hazard: senators on Harleys.

Interior Department has amended its original filing for water rights to protect the Black Canyon of the Gunnison National Park. The original filing was for all unappropriated water in the Gunnison River with a 1933 priority date. This would have provided the Canyon with a minimum flow, year-round and peak flows in the spring. The amended filing is for up to 300 cfs, year-round, based on a closed-door agreement between Interior and the State of Colorado. Interior (for the Park Service, through the Justice Department) has also stipulated to honor all water rights claimed between 1933 and 1957 as well as up to 60,000 af of future depletions. Several non-governmental organizations (NGOs) have filed objections to the amended water rights application.