AFTER YEARS OF STUDY, it has occurred to me that _Westcliffe is a town that’s always striving to find an identity or to be something more than it is. And it never quite pans out. But recently I’ve seen a sign that perhaps this century-long identity crisis is coming to an end.

It’s odd that we use the name “Westcliffe” as a catch-all for what really is two towns, Westcliffe and Silver Cliff, plus the outlying areas of Custer County, where most of the residents actually reside. I sometimes use the word “Clusterplex” to describe this far-flung little community.

There’s some truly outstanding poetry in the premiere edition of Talking Gourds, an annual described by its publisher as “a state literary magazine publishing the many good regional writers and poets in Colorado.”

At Monarch Ski Area, the prices are going down-substantially. A season pass, if purchased in May, costs $199. Several years ago it cost $375.

Even skiing on Highway 50 is dictated by the I-70 economic structure.

Colorado Springs is easily the most important market for Monarch. But for a Colorado Springs skier, Breckenridge is nearly as close, and Copper Mountain just a few minutes farther yet.

IT WAS THE TUESDAY after Washington’s Birthd5ay Weekend, and the parking lot at Ski Cooper was nearly empty. “We might do 140 today,” Joe Fox was saying.

“When you have more employee cars than customer cars, you know you have a problem.

THERE ARE NEW SITES for us mountain folk making our spring trek to see how the other 99% live. The “New Urbanism” [Colorado Central, April, p. 9] has claimed two of Denver’s old meccas. Cinderella City and Villa Italia, “regional malls” of the Sixties and Seventies, are both being supplanted by “New Urbanism” developments.

I enjoyed reading your articles about water conservancy districts. I think you did a good job on a tough subject. For you, pretty damn balanced, too.

One thing I wondered about was why you didn’t mention the “en banc” procedure expected of judges who have appointment responsibilities? Although they don’t follow this procedure enough, to my way of thinking, it is a mechanism that theoretically keeps one judge from putting his good old boys on the conservancy board.

Issue #86 was nicely done — as issues of Colorado Central usually are — and I’m glad to see a magazine devoted to those of us unlikely to ever be able to afford a pardon.

In the April edition, you did a magnificent job of explaining the history of the Colorado Water Conservancy District law and its ramifications, as well as the recent attempts to hold elections for directors, using a difficult, unsatisfactory, and cumbersome method — although it’s admittedly better than what the folks in the West Divide WCD tried to do in the ’80s.

With each issue of Colorado Central I am always inspired to write to you and tell you how much I enjoy your magazine. I don’t get around to it, which is just as well because I am sure a monthly letter from me telling you that I have been inspired by your most recent edition would be very boring, not to mention repetitious.

Man! Had ah known that yer supply o’ letters was gettin’ so short that yuh had to resort to usin’ some written by people who are practically employees to fill up the free space in the back, ah’s have come out of semi-enforced, retirement sooner. Ah think it was probably that Tao of Ed remark (fer Pete’s sake we spent millions on the curmudgeon campaign!) which was the last straw, although that would fit with the fibre art piece. And, hit seems like ole Slim Wolfe musta got hisself electerrified at last, er maybe he finally ran into the Wicked Witch o’ the South. In any event, ah always wundered where thet expression “he don’t know his ass from a hole in the ground” come from. Ah had assumed thet hit had a less erudite origin and now thanks to the most recent Colorado Central, ah know better.

Here’s how to daily enjoy food that’s freshly prepared and therefore more healthful and satisfying. Simply cook a pot of grain in the morning and it’s the base for that day’s breakfast, lunch and dinner.

THERE ARE A LOT OF diet deities out there. Some preach organics only, some the value of veganism. Listen to me, they say. Raw foods. Red foods. No foods.

Rebecca Wood, cookbook author and teacher, tells each student to listen to the most important person: himself.

I’VE BEEN THINKING about my father this past month. Maybe getting to be middle-aged has something to do with it; that and I’m beginning to realize that my father and I are a lot alike in some ways. Both of us are stubborn and terminally self-employed for one thing.

SEVEN YEARS AGO I attended a conference in Denver, sponsored by the Center for the New West. It concerned a common topic: what’s happening to the Mountain West as our traditional extractive economy (mining, ranching, logging) fades away.

Someone said “urbanization” was a threat to our way of life in the hinterlands, and I took issue with that. I said it was “suburbanization” that looked like the bigger threat.

Western State College in Gunnison planned to celebrate its centennial on April 16 with a picnic that had live music and some drawings for prizes.

It was on April 16, 1901, that Gov. James B. Orman signed a bill passed by the Colorado General Assembly which appropriated $2,500 to establish “the Normal School at Gunnison.”

Parts of Central Colorado got a new state senator in April, and this isn’t even an election year.

The new senator, Lewis Entz of Hooper, is a statehouse veteran — he served in the General Assembly from 1983 until 1999, when term limits got to him, and he was a commissioner in Alamosa County before that.

The Colorado Council of the Arts has announced the recipients of twenty 2001 Artist Fellowships, and the list includes four artists from Central Colorado. According to CCA, “these $5,000 awards acknowledge outstanding achievement by Colorado artists in their disciplines.”

Among the recipients is fiber artist Judé Silva of Buena Vista who was featured in last month’s Colorado Central. Panelists praised her “ability to create a lively space with fiber.”

Despite a challenge from the Upper Arkansas Water Conservancy District, there will be an election for one director’s seat.

The voting will be on July 10 at a polling place in or near Buena Vista, according to an order issued after a hearing on April 5 by District Judge John Anderson of Cañon City.

Nobody along this stretch of “America’s Loneliest Highway” has promoted it yet, but there are plans for a coast-to-coast yard sale this month. It’s the second annual Great U.S. 50 Yard Sale, scheduled for May 18-20. The yard sale started in 1999, stretching across most of Indiana.

Organizers say the goal is for it to grow into a Coast-to-Coast event held each year on the weekend before the Memorial Day weekend.

The official 2000 numbers from the 2000 census are starting to trickle out, and there weren’t many surprises, except in Park County.

But that’s too low, according to two county officials. Assessor Dave Wissel said there were 14,000 residential structures in Park County, and so “20,000 is a much closer number.”

At some point, we’ll try to get official with these quizzes and give away T-shirts or something to the winners. But that would mean having rules and deadlines, none of which we’ve contrived yet.

In the April edition, we asked about old county seats, and here are the answers (our official source was Historical Atlas of Colorado):

Old Days Are Back

It’s back to the old ways on La Sierra (a/k/a the Taylor Ranch east of San Luis) — the old violence, that is.

An employee of what is now the Pai Ranch was accused of shooting at a local man. The accuser, Ben Quintana, said that Carlos DeLeon shot at him with a rifle; DeLeon said that Quintana hit him in the head with a shovel. The Costilla County Sheriff’s office is sorting through the evidence, which includes shell casings and photos of Quintana cutting fence on the Pai property.

In the April edition, a couple of errors crept into the articles about water conservancy districts. On page 18, we said there were “45 of them in Colorado at last count.”

Various sources listed 45 to 51; if you take the Colorado Department of Local Affairs (to which all districts must file annual reports) as the authority, then there are 50 of them. 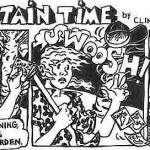 The following are all published descriptions of places in Central Colorado or the San Luis Valley. Can you figure out what they’re writing about?

1.) “Sheep and cattle-raising, however, are the principal occupations of the settlers, about one-half of whom are Spanish-Mexicans, and live in adobe houses, surrounded by cattle, sheep, goats, babies and dogs. The town consists principally of adobe and log buildings, yet there are a few good brick and stone buildings for business purposes…”

THERE ARE PLACES in the West where roads have no names. Places populated solely by stumpy sagebrush and vesicular basaltic stones. Places where five mile strips of dirt terminate at isolated farm houses. The names for these places make their own sort of wasteland sense: 2300 Road, N80 Lane, C-½ Road, O90 Drive, J50 Road, 3750 Road. Numbers and letters strung together at capricious random.

Due to sublimation (caused by the wind evaporating the snow) much of the moisture in April was lost. The snow water equivalent in Colorado on May 1 was: Gunnison, 72%; Upper Colorado, 74%; S. Platte, 83%; Laramie/N. Platte, 72%; Yampa/White, 69%; Arkansas, 87%; Upper Rio Grande, 114%; and San Miguel/ Dolores/Animas/San Juan, 97%. Reservoir storage is 107% of average in Colorado but only 76% of last year’s storage. Utah’s snowmelt in April was 173% of average indicating reduced projected runoff with current storage in Utah at 85% of average.