Thanks for your thoughtful essays on global capitalism and its dubious benefits. I currently work with High Country Citizens’ Alliance (HCCA) in Crested Butte, and come from several years of working on international economic issues in Latin America. We are trying to apply some of the lessons learned in Central America to the local situation here and the issues that you address are familiar! Scale and the related “locus of control” are issues that I think are particularly challenging, so I read with interest your recent piece.

As proprietor of Scandesign Outhouse Wainscotting (www.Nørpoop.com), I was baffled by your correspondent’s assertion that yardlights obscuring Fort Collins’ night sky are of Scandinavian heritage. In the San Luis Valley, I might pin the blame on Alabamians. But what the heck, they can’t hold Sunday meetin’ if all the vipers get loose on Saturday night, now can they?

At the request of both of my faithful readers, ah’m retuning to the word processor to try an’ inject a little humor into the pages o’ Colorado Central. Fer them other three people who were wonderin’ why ah ain’t written much lately, grief has a way of cutting into yere sense o’ humor and priorities too.

About that June issue

I enjoyed your new web site [www.coloradocentralmagazine.com]. Some comments on the June issue:

Last time I went through Flagstaff, to attend the Grand Canyon Railway Steam Weekend in nearby Williams last October, I didn’t see that reputed “ugly fortress hotel.” Perhaps it wasn’t visible from the train, or the Nava-Hopi coach to Williams. I wonder if it’s like that new Omni at Inverness between Boulder and Broomfield for which it would be a very apt term. Unaffordable to the common man too, with rates set to be a whopping $159-209 a room — per night.

The New Western History – The Territory Ahead
Edited by Forrest G. Robinson
Published in 1998
by the University of Arizona Press
ISBN 0-8165-1916-1

Devil’s Bargains – Tourism in the Twentieth-Century American West
by Hal K. Rothman
Published in 1998 by University Press of Kansas
ISBN 0-7006-0910-5

As various municipal and county governments in Central Colorado grapple with planning and zoning, we hear a lot about “property rights,” often in the context of “the damn government is trying to take away my property rights.”

But what, exactly, do we mean by property rights? What is property, and what rights are involved?

“Doing time” is no one’s goal in life, but the invitation to “Come do time with us” annually entices 20,000 people into the Colorado Territorial Prison Museum at Cañon City.

At the museum, 30 original cells are packed with reminders of the colorful history of Colorado, Cañon City, and 130 years of prison system “happenings.” There are first-hand tales of inmates and guards, and of life behind bars. Here, personal battles and riots come alive.

The House Was Not What We Feared It Was

We were worried that it was yet another sign of the end of Central Colorado as we know it when someone told us that a Saguache home got eight pages in the June edition of the tony and upscale Colorado Homes & Lifestyles magazine.

Where does paper come from?

Alternative products from our forests seem to be emerging every day, with one even popping up from poop. The Toronto Globe and Mail reports that a researcher has produced sheets of paper from mashed and pressed moose droppings. Since moose munch mainly on twigs and branches, the paper, called MoDo, never requires trees to be cut down.

4 Corners Region Gets a Magazine

Durango’s got a new magazine — Inside/Outside Southwest — which started last year as a bi-monthly, but will be coming out every month starting this July.

Ken Wright, a frequent contributor to Colorado Central and a principal in the departed San Juan Almanac of Durango, is its managing editor.

THERE WAS A TIME when our local governments protected us from wolves by offering bounties on them. That worked so well that there aren’t any wolves left to protect us from. And now that we’re in the “information age,” we need to be protected from information about wolves.

Single Malt from the Valley

Earlier this year, two Vail businessmen announced plans to build a distillery in the San Luis Valley between Alamosa and Monte Vista. It wouldn’t be the first still in our part of the world — “Leadville Blue” was a favorite during Prohibition — but it will be legal and provide 15 to 20 full-time jobs.

View of a Cog as Action 22 Starts Rolling

The first Action 22 regional caucus of the San Luis Valley drew about 40 people, a fair sample, since there was little publicity of the event beforehand. Cathy Garcia, acting board member, came from Pueblo to facilitate the meeting and carry recommendations back to the acting board.

Robert F. Kennedy Jr. visited the San Luis Valley on Cinco de Mayo, to speak at a fund-raiser for Alamosa Riverkeepers. The conservation group was recently accepted into the national Riverkeepers organization. That, and the appearance by Kennedy, means a lot of attention for the group and its mission, to clean up the Alamosa River. The river has been officially dead since ’93, a result of toxic runoff from the Summitville Mine site.

Buena Vista’s title as “Recall Capital of Colorado” should be secure for a while.

On June 8, voters replaced four of the town’s six trustees in a special recall election; the recall margins were on the order of 250 for ousting the incumbent to 220 to retain. About 37% of the electorate — 510 of 1,385 registered voters — went to the polls. 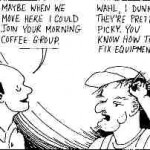 I BEGAN MY “CAREER” as a Grand Canyon river guide in 1971, in the heart of what we later referred to as the clueless years. Few boatmen had more than a couple dozen trips under their belt; some were on their first. We had few wizened veteran guides to tell us where to hike, how to get through Hance Rapid at low water, or how best to manage a disgruntled guest. We were on our own, figuring it out as we went along. A trip that finished at the right place, on the right day, was a good one.

BANNER DAY STUDIO in Del Norte is a fascinating mixture of construction and creativity. Two rooms, warehouse-sized, are lined with banners and bolts of cloth. Worktables, tools and the detritus of sewing let visitors know this art is serious business. The finished pieces on the walls and windows say this business is about beauty.

ONE OF THE FUN THINGS about living in Central Colorado is that neighbors sometimes appear at your house to show you the interesting toys they’ve found to amuse themselves.

Recently, when a neighbor told me he wanted to show me his “spud gun,” I thought he said “stun gun.” So I was surprised when he pulled a four-foot-long piece of PVC pipe out of his truck, stuffed a red potato down one end, sprayed some Aquanet into the other, and then, pointing the spud gun in a safe direction, turned a small knob on the hairspray end.

PART OF the millennial excitement as the year 2000 approaches comes from some Christians, who believe that Jesus will return to earth next year.

Such predictions and calculations have been around since the dawn of Christianity, even though Jesus made it clear that “No man shall know the hour and place of my return.”

FIFTY-FOUR YEARS AGO this month, on July 16, 1945, the world’s first atomic bomb was detonated in the Jornada del Muerto, in central New Mexico between Alamogordo and Socorro. (Curiously enough, the place was named the Journey of Death — or as some would have it, A Day’s Journey into Death — long before that event.)