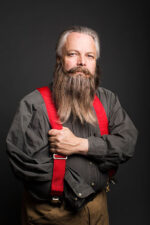 CLAY JENKINSON, A HISTORIAN, AUTHOR and scholar with a heartfelt interest in the American West, will make a one-of-a-kind appearance at the Salida Steamplant Event Center June 25 as the incomparable John Wesley Powell. Well known for his various books and documentaries, Jenkinson is also a one-person interpreter of various historical figures. He shared that …

“The first time I heard her sing, I thought, ‘that’s it,’ I wanted to marry her.”
Those are the words of Salidan Duke Sheppard describing how, nearly 30 years ago, the early seeds were sown for the arrival of the musical duet Pint & A Half on the contemporary Colorado music scene.
It was in Union, Missouri, back in 1987, when Duke and his future wife Tami went on their first date while still in high school, after a talent show where they were both scheduled to perform. He was playing in a heavy metal band, Damage Incorporated, and she was singing classical music along with her church choir. Not exactly a pairing one would expect to have a musical future together, but life can be full of unexpected surprises. Two years later they were married. 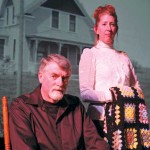 by Judy Reese They are not all professional theater folk: some have not acted since high school, if at all. Some are his friends; others knew him only through his novels. But at Salida’s SteamPlant, in the town where he made his home, they’ve come together to celebrate Kent Haruf – the man as well …