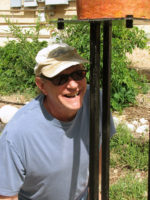 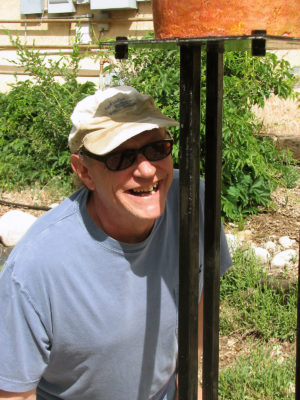 In Memory of Ted Fish

On March 10 of this year, Salida artist Ted Fish died due to complications from heart surgery at St. Joseph Hospital in Denver. Ted was born in New York City in 1946 and grew up in East Stroudsburg, Pa.

In 1971 he received his BA in political science at East Stroudsburg University and four years later married his wife Louise. In 1982, the couple moved to Denver where Ted earned a BFA with an emphasis in ceramics in 2001 at Metropolitan State College. He exhibited his trademark clay heads throughout the state and in Texas, New Mexico, Alabama, North Carolina, New Jersey, Florida, Massachusetts and New York. He was the author of a book, 500 Figures In Clay, published in 2004, and won the Laguna Clay Award at the Colorado Clay Exhibition in 2003. In 2005, the couple moved to Salida.

Ted’s work was hand-built with a modified slab coil technique generally using paper clay. Pottery shards or other items were often embedded prior to bisque firing. Low fired glazes or slips were applied and the work was fired at 1,950 degrees F. For many pieces, a third firing in a raku kiln followed and the work was then removed from the kiln and sprayed with ferric chloride. He named this process Ferriku. Other pieces were finished with acrylic paint and some were placed on a found object metal base, marble, wood, or other materials. Ted also enjoyed painting with acrylics.

From his artist statement: “All of the work results from my interest in the power of primitive and ancient sculptures and how such sculpture connects the meditative, contemplative mind with emotions ranging from restful loving to excited anger.” 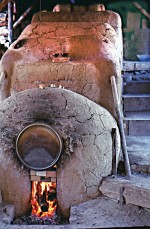 A unique chapter of South Park history is that for 27 years, Fairplay was home to a fire-breathing beast that belched smoke for days, luring artists, students and the curious to be near its flames.

Master potter Mark Zamantakis fired up his massive three-chambered, wood-burning Japanese kiln in June at an elevation of 10,880 feet to imprint his pottery with the subtle, ethereal variations of the flame’s life and moods. The pottery recorded the experience of the present moment, giving each piece richness, depth and uniqueness.