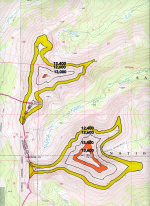 Southern Chaffee County boasts a fabulous view of three mountains in the Sawatch Range named for a Ute (Nuche) Indian family – Mount Ouray, Chipeta Mountain and Pahlone Peak. Indians don’t typically name mountains after themselves, so my guess is that some “white guilt” went into that honor – like a developer who names streets after the trees cut down to build a subdivision. But there is another problem – perhaps an error on the part of the applicant or the U.S. Geologic Survey Board on Geographic Names (BGN). Mount Ouray and Pahlone Peak are named for the highest point on their respective mountains, but Chipeta Mountain is named for the second highest point on its massif and is actually out of plain sight. Thus an effort to commemorate an important woman ends up coming across as more of an insult. So perhaps a campaign to move the name “Chipeta Mountain” from the 12,850-foot sub peak to the 13,472-foot highpoint is in order.