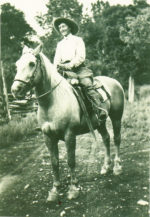 In the old West, around the turn of the century, a few ranchers’ daughters – a brazen few – decided to shake up the establishment a little bit, rock the boat and rattle a few cages. They put on shocking divided skirts or even pants borrowed from fathers or brothers. They abandoned their ridiculous sidesaddles and dared to get on their horses astride. Then they happily rode off, leaving their ladylike images in the dust; they hunted coyotes, rode the range, homesteaded, roped steers and branded mavericks. They married or didn’t – they inherited or homesteaded or bought ranches. In the very Western and very male world of cattle ranching, they became bonafide ranchers – America’s very first women ranchers: a new breed.
Early-day women ranchers were truly a rarity but Western Colorado claimed a few of them and the following is a brief look at five women – motivated by either necessity or an appetite for a way of life – who showed that they were equal to the difficult task of ranching.