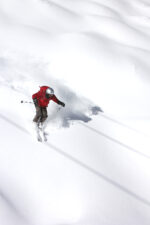 THE TELEPHONE RANG MUCH EARLIER than I had expected. “Moeller, get up,” the excited voice blurted. “It snowed 13 inches at Monarch. Let’s get rolling.” I clambered out of bed, looked out the window and grinned. The Pueblo sky was dumping fat, sloppy flakes the size of pancakes. Moments later Adam sped up to my …

By Forrest Whitman Colorado folks, especially here in the Upper Arkansas Valley, used to be called “Colorado nice.” I still hear that sometimes, but not often. There are more of us here and that may result in less “nice” and more “grumpies.” Population booms lead to some positives and some negatives, but there’s no argument …

By Forrest Whitman Passenger rail travel can be accessed conveniently with a three-hour bus ride from Salida to Denver. It’s going to be even more convenient in the future if the Colorado Passenger Rail Commission has its way. I host a rail show on KHEN radio (106.9 or on podcast) and attend many rail meetings. …

Marijuana. Most folks are either decidedly for it or against it. Me? I’m mostly a weed spectator though I lean toward the libertarian viewpoint that a person has the right to do whatever to their own body so long as it doesn’t harm others.

Like it or not, marijuana is now legal for both medical and recreational purposes in Colorado and business is booming. You can tell this by the number of shops with mostly cutesy names like “Starbuds” and “Mile High Green Cross” along the highways. And also by the number of greenhouse grow operations springing up across the countryside, particularly in nearby Pueblo County. Whether all this will withstand possible federal legal challenges remains to be seen, but for now a person can buy weed in several Colorado counties and municipalities, and some insiders say the biotech boom in northern Colorado is based on the prospect of future pharmaceutical takeover of the cannabis industry.

Here where I live in Custer County there is a ban on sales and industrial cultivation of marijuana, though residents are free to buy it elsewhere and use it privately.

Meanwhile, to the east, Pueblo County has been called the “Napa Valley of Weed” by The Denver Post and the Colorado Springs Gazette. I’ve been astounded by both the number and size of the grow operations that have sprung up along Colorado Route 96 in western Pueblo County.

By Forrest Whitman “A review by BNSF Railway of needed infrastructure improvements to support that service would be complete before Christmas,” said Ray Lang of AMTRAK. He gave that quote at a Southwest Chief Commission meeting to the Colorado Association of Railroad Passengers. The folks in Pueblo have worked for several years to make passenger trains …

My interest in locally grown foods began about 14 years ago. I had long held the belief that the highest-quality foods were essential to optimal health, fitness and brain function, and that eating well also was part of living life to its fullest.
I was at the annual Pueblo Chile Festival when I spied a small table. There were two farmers there and they didn’t really have much for sale, but I think I bought some onions and something else, and they told me some of their story. They were from an outfit called Tres Rios Co-op, and their names were Dan Hobbs and Doug Wiley. I think it was Dan who handed me a business card.
Being the curious sort, months later I decided to pay Dan a call. I ended up at Hobbs Family Farm near Avondale out east of Pueblo, where I bought a boxful of vegetables. Lo and behold Doug showed up there, too. I mentioned that I was also looking for some hay and Doug said he had some for sale. So we drove over to his Larga Vista Ranch where I bought a pickup load of alfalfa and some pork chops. 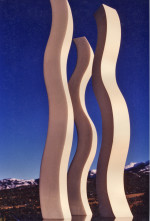 It’s quite likely there may never have been an arts scene in Salida without the arrival of sculptor Chris Byars. One of the ironies of this is that many recent artists to town have never even met the man.

While on a back roads tour of Colorado in 1971, the Denver native stopped in Salida to visit his older brother Jack, who was living there at the time. The following weekend, Chris followed suit.

photos and story by Mike Rosso

A prominent Pueblo-based architect with multiple buildings listed on the National Historic Register is responsible for the “Art Deco” style typified in the original Chaffee County Courthouse in Salida.

Walter DeMordaunt, who practiced architecture in Pueblo, Colorado from 1920 to 1962, was hired to design the courthouse in 1929 after a controversial 1928 election was held that moved the county seat from Buena Vista to Salida. But the controversy did not end there. Disputes over the use of contractors and local labor overshadowed the construction. Over DeMordaunt’s objections, county officials decided to brick over the stained glass windows he designed for the records vaults citing security issues, according to the book, Trails of the Columbine. “Private citizens” supposedly took matters into their own hands and removed the offending brickwork but it was later reinstalled where it remains to this day. The courthouse officially opened in its new Salida home in January of 1932.