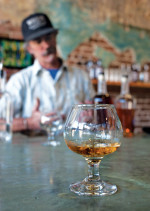 Colorado has been known as a beer-brewing mecca for years, and recently that trend has shifted to micro distilleries. In early 2011 the Alcohol and Tobacco Tax and Trade Bureau had issued 18 distilling permits in Colorado. In November, Wood’s High Mountain Distillery in Salida received the 38th permit in the state. The distillery on 1st Street opened its doors to the public on March 2, becoming the second distillery in the valley. Deerhammer opened in Buena Vista in February 2012, and two more distilleries hope to open this spring: Two Guns in Leadville, and Boathouse Distillery in Salida. The boom in craft-beverage making has certainly made its way to the Upper Arkansas River Valley.