By Polly Oberosler With shovel on his shoulder, my husband Dave slogged out into the hay meadow in hip boots to do some water irrigation. His dog was somewhere around and soon he heard her splashing behind him before suddenly zooming ahead of him. To his amazement it wasn’t the dog at all, but his … 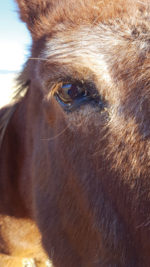 By Polly Oberosler The first thing most people are attracted to on a horse or mule is usually the eye. Even folks who aren’t “horse people” notice the eye as it seems to draw you in. It is a deep sphere and it seems you can look right into the horse from that inch-and-a-half area …

Editor’s Note: Back in April of this year, a massive rockslide occurred on Schofield Pass, a four-wheel-drive forest service road which connects the towns of Marble and Crested Butte.
Popular with mountain and dirt bikers, hikers and Jeep enthusiasts, there was speculation that the sheer enormity of the slide might permanently close the pass, which was originally built in 1883 as a wagon route between the two mining towns. But, on June 8, after three days of work by a dedicated crew of U.S. Forest Service employees, F.S. Road 314 has reopened.
The work was overseen by Jim McBreen, construction and maintenance supervisor for the USFS He described very large trees above the road that were shattered by the slide and reported that one of the holes in the road was nearly 16 feet wide and 4 feet deep. He estimated that nearly 100 yards of road were affected by the slide. A bulldozer team consisting of Larry Augustson and Salvador Landa did much of the road clearing, despite the difficulty of bringing the machine up to the remote location.
Jeepsters and other local four-wheeling clubs regularly perform volunteer work on the road, but this slide was a bit outside of their ability levels. We asked sometimes contributor and Gunnison Valley native Polly Oberosler to share some insights into the pass with us.

By Polly Oberosler Up until the 1950s, water running through small ranches in the Gunnison Valley and other rural areas in western Colorado were destinations for fisherman from the Front Range. Nearly every ranch had a cabin or two where the fisherman came to set up “housekeeping” for a few days, and the ranchers had …

My paternal grandfather, John Sherman Moses Cranor, born in 1864, was a sixth-generation American and worked at whatever he could to make a living, as did most during his time. In doing so, he inadvertently schooled his five children in lessons of resourcefulness, honesty and hard work that they soon needed. My grandmother died in the 1918 flu epidemic, and they were virtually on their own quite prematurely.

Those young people were the movers and shakers of a generation of Americans unparalleled in history. They came from the era of the horse and buggy, yet crossed the lines and adapted to the most accelerated portion of industrial expansion. They absorbed incredible knowledge and savvy about anything or any piece of equipment as it was manufactured and put to use in the fields, on the dam projects or on the highways.