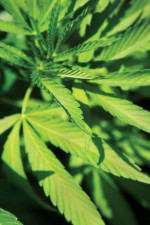 Colorado voters made history in 2012 when they passed Amendment 64, allowing for the cultivation, sale and personal use of marijuana.

But easily overshadowed by its sexier cousin was the part of that ballot initiative that also allows for the growing and processing of industrial hemp. Although 64 did not authorize the immediate cultivation of hemp, it directed the General Assembly to enact legislation regarding it. With sponsors Rep. Don Coran and former Sen. Gail Schwartz, they passed SB13-241, the Industrial Hemp Growers Registration DOA, which was signed into law by Gov. Hickenlooper in May 2013.

Hemp, like marijuana, is derived from the cannabis plant, but contains little if any of the psychoactive components of the popular recreational drug. What hemp does provide is an endless number of commercial, industrial and medical benefits from the entire plant – from stem to seed. It also requires fewer pesticides for growth than most major food crops and requires considerably less water than crops such as corn.

Hemp is currently legal in many other parts of the world including most of Europe. Russia, Japan, Thailand, Chile, India and Canada are among many others that produce industrial hemp, but the leading producer of in the world is – who else? – China.