THE HOT TOPIC in Salida these days is a new hospital. It’s a topic for Central Colorado as well, since the facility is not just the “Salida Hospital” of days gone by, but the “Heart of the Rockies Regional Medical Center” whose region includes all of Chaffee County, Saguache County down to Villa Grove and Saguache, and into the Howard area of Frémont County. That’s the “Hospital District,” which has an elected board to collect property taxes and oversee operations.

“We have to go back to Mother Nature’s way of doing things, and until we do that we’re going to continue to go down in every way possible. In farming, if it’s not sustainable, we shouldn’t be doing it.”

“To Frank’s father every animal had a dollar meter on its back and the needle was always in motion. Sometimes it was going down. If you ran a thousand head, you had a thousand meters and you had to keep those needles going up”

As Crestone is blessed with operatic singers, those singers are blessed to have a place to perform, Hazlerig Music House.

Sylvia Hazlerig built a structure in 1998, just down the hill from her new home. That building was meant to house her grand piano and harpsichord, because there was no room for them in the A-frame.

Vaughan has been in Crestone for eight years, after having spent 20 in New York “at the Met.” She sang in the chorus of the Metropolitan Opera for two decades before retiring to her native Colorado, and now works with the choir of the Methodist Church in Monte Vista in addition to giving private lessons.

For quite a number of years I’ve been happy to offer you these cantankerous musings on a regular basis and always far in advance of your deadlines. Granted my copy isn’t always word-perfect but it seems to strike a chord in at least some of your readers. Happy enough to make a public fool out of myself, I’ve never asked for pay. I assumed that monetary compensation would rightly be the reward of those who put some pains into creating a product of value, and usually the material printed in Colorado Central meets that criteria.

I got quite a chuckle out of the March Colorado Central report from Leadville, about the fellow who claimed to be Amish and so “not subject to building codes.” He should get some sort of prize for creativity as he pays his fines.

I’m reading Sibley’s book [Drangons in Paradise]and enjoying it very much. And if I can find that January copy I’ll reread Ed’s review. I was wondering which issue that was in and found the answer on page 12 of the March issue. Mountain Gazette is a handsome and rugged publication but I’ve never found much of interest between the covers. I’ve got the February issue around here somewhere and if I come across it, I’ll check out page 7, sounds interesting – recycled Colorado Central.

I have just devoured the March edition from cover to cover. Some issues are just chock-full of stuff, others are ho-hum to me and so it goes, right?

I did love the quote on page 9: “I wasn’t inclined to argue…” I think I shall adopt it as my motto. And I did like the next quote, too, goes right along with your stupid zone [about the lack of rural health care].

Upon reading this story, we suggested a little more detail about just how likely, or unlikely, it was that earthquakes will be coming to an area near you. But the author was disinclined to speculate. Apparently, even a geologist can’t predict when an earthquake will happen.

“We don’t have earthquakes here do we?” is a question I’ve been asked a number of times over the years — although, I’ll confess, it does seem to come up more frequently at functions where alcohol is served.

As I’ve matured I’ve learned to temper my response to something on the order of “Well, in my opinion we’re just lucky Salida isn’t a pile of bricks.”

FROM THE HIGH MOUNTAIN Hayfever Blue Grass Festival in July, to Jazz in the Sangres in August, to Wet Mountain Western Days country and western music festival in September, it’s all about music and summer in the Wet Mountain Valley.

IN AMERICA we often find ourselves surrounded by Big Ideas that may or may not be helpful in the daily running of our local lives. Democracy, Freedom, Markets, Social Safety Nets, Big Ideas are getting worked out in the cultural environment around us, the way big things like glaciers or global climate get worked out in the natural environment around us.

In 1885, Salida was well on its way to becoming the center of Colorado’s main transportation network – the Denver & Rio Grande Railroad.

Trains from every direction once passed through Salida. To the east the tracks ran to the Royal Gorge, Cañon City, Pueblo, Colorado Springs and Denver.

“Writers have an island, a center of refuge, within themselves. It is the mind’s anchorage, the soul’s Great Good Place.” –Wright Morris, American novelist

WRITING AS A MEANS of spiritual unfolding has a long tradition in cultures the world over. It’s a tradition being upheld in Central Colorado today by sisters-in-law Amy Frykholm and Stephanie Frykholm.

The Making of a Hard Rock Miner
by Stephen M. Voynick
Originally published in 1978 by Howell-North Books
Republished by the author
ISBN 0-8310-7116-8

Huerfano: A memoir of life in the counterculture
by Roberta Price
Published in 2004 by University of Massachusetts Press
ISBN: 1-55849-469-3 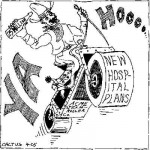 In addition to Hunter Thompson, three other people have killed themselves this year in the Roaring Fork Valley, where Aspen is located, and another person hanged herself.

On March 3, the Monarch Ski and Snowboard Area opened Mirkwood Basin, which it bills as 130-acres of Extreme Terrain. Skiers must hike about 500 feet uphill to reach the dizzying heights, which now make up Monarch’s steepest terrain.

We get a lot of summer tourism from the Lone Star State, and it would stand to reason that high oil prices would produce a prospering Texas, which in turn would mean visitors with plenty of money to spend.

But it’s not working out that way, according to an article in the March 7 edition of the Wall Street Journal. Oil prices are over $50 a barrel, and Texas leads the nation in oil and gas production.

We all know that April 15 is Deadline Day for filing personal income tax returns. It’s also the deadline for submissions to New Rocky Mountain Voices, the seventh annual one-act play contest sponsored by the Westcliffe Center for the Performing Arts. (As the name indicates, it’s based in Westcliffe, but such nomenclature offers no guarantee, since Westcliffe Publishers is in Englewood.)

When the price of crude oil rises, especially when there’s turmoil in the Middle East, there comes talk of developing the immense oil-shale reserves of Colorado, Utah, and Wyoming. How vast? Try two trillion barrels, or 60% of the world’s known supply.

Last year, we reported on the closing of the Sweet Home Mine near Alma. It started as a silver mine in 1873, and was resurrected in recent times to produce rhodochrosite, a red gemstone that was declared Colorado’s official state mineral in 2003.

The mine closed on Oct. 18, 2004 because the declining number of crystals being found did not bring enough income to cover the expense of mining. Reclamation work will soon be underway at the site.

This year’s business licenses in Alamosa County come with a bonus — a warning that the license can be revoked on the basis of “public morals.” Many business owners are upset by the vague threat, pointing out that “public morals” is in the eye of the beholder. The county assured everyone that due process would be followed before a business license is yanked.

Will the Union Pacific Railroad ever again run trains over Tennessee Pass through Buena Vista and Salida to Cañon City?

No freight trains have made that run since 1997, after the UP completed its merger with the Southern Pacific, which included the Denver & Rio Grande Western which had built and operated that line for more than a century. Initially, the UP was going to abandon the track after the merger, but withdrew that request in 1998. The line is now “out of service,” and from what we hear, it would need some work, like removing small rockslides, before it could return to service.

WHEN MY FRIEND Kevin passed through South Dakota on a cross-country road trip a few years back, I did the decent thing as a host and took him to see Mount Rushmore. Why pass by the ninth or tenth wonder of the world and not at least stop by? Still, it’s one of those things I can only bring myself to visit when a guest is involved; I’ll bet the people of Pisa avoid their cockeyed tower like the plague.

At its March meeting, the Colorado Water Quality Control Commission decided to no longer offer the oil and gas industry an exemption from stormwater permit requirements. Two years ago, the Commission suspended its requirements after EPA decided they needed additional time to study the impacts of regulating drilling pad construction. The current Colorado Stormwater Regulations require any construction disturbance of more than 1 acre to obtain a permit that prescribes Best Management Practices to prevent sediment runoff from these sites. Colorado is permitting over 2000 wells/yr. that will now be required to obtain a stormwater discharge permit before constructing new wells.