ON A BRIGHT MID-WINTER DAY, Rob Pedretti put his hounds onto the track of a mountain lion, just as he had done hundreds of times before. The hounds rambled off through the snow and were quickly baying along a hot trail through the frozen crystals. Rob, a veteran lion hunter, outfitter, and endurance athlete clambered along after them. When he reached the end of the trail he found his dogs gathered around a tree which contained not a mountain lion, but a bear.

IT IS A STANDARD CLASSROOM, except for two things. First, it’s Saturday, and second, teenagers in the room don’t look bored or blank: they look elated or dismayed.

They’re clustered in groups of four, each holding contraptions that look like bomb detonators. An adult at the front reads from a sheet of paper: “The category is: subatomic particles.” Noise fills the room. Three lights appear on the box of a college student holding a time-keeping device, each light flares an instant after the other.

COLORADO CENTRAL MAGAZINE is ten years old this month, so I’ve been reading back issues and reflecting on past events. And I couldn’t help but notice that we are always advising people to attend meetings, and vote, and write letters to their congressmen or local newspapers.

But I’ve got a confession to make. Looking back, I’ve come to a conclusion:

THE MONTHLY MEETING of the San Luis Valley Quilt Guild was under way in Monte Vista. The agenda was packed with new business and old business, plans and updates, as with any professional meeting — but at most meetings, the members don’t stitch while they discuss business.

The guild was started in April 1991 by five dedicated quilters. “Some of us wanted to start it, so we did,” one said.

CENTRAL COLORADO is haunted by ghost railroads. Some rails are long gone, but you can drive where the trains once ran: over Marshall Pass in the summer or through the Midland Tunnels on the county road just north of Buena Vista.

WHEN WE STARTED Colorado Central, we observed that most other magazines had “taglines” — a few words on the cover, near the magazine name, which explained the publication.

Some of these were merely accurate, like “A newspaper for people who care about the West,” used by High Country News. Others were rather grandiose, like “The world’s leading authority for computer-purchase decision makers.”

Article by Martha and Ed Quillen

OUR FORAY INTO Latin a little more than a year ago produced this word for “125th anniversary,” formed in the same way as “sesquicentennial” for 150th anniversary.

Last year, Leadville, Alamosa, and the Jackson Hotel in Poncha Springs celebrated their quarquicentennials, since they all got going in 1878. By 1879, there was more development hereabouts, so there will be more quarquicentennials this year.

FOR THE SAKE OF the earth and all life thereon, not to mention a century of fumbling but earnest efforts to create a fair and accessible society, I am hoping that the neoconservative assault on everything I value as an American will be turned back this November, and I am heartened by what seems to be a growing awareness of how massive this assault has been in the past three years.

I durn near passed out reading Ed’s discussion of the water issue, which was not Ed’s fault at all, but rather, the nature of the beast itself. Then I durn near passed out rereading my own epistle. I’m surprised anyone would print my letters in public; apparently I must have taken a course in essay-writing from the Klee-Magritte-Escher Academy, but I don’t recall.

Letter from Meezie And Dick Stacy

Last week I received your subscription-renewal postcard for Colorado Central, which I immediately returned, along with my check for $20. On that card there was a blurb about a bighorn sheep that was shot near Spikebuck in 1807. This reminded me of a humorous story that my wife, Mary Louise (Meezie) once told me about Spikebuck, as we passed the railroad junction box so labeled while driving along the Arkansas River on our way to Cañon City. I thought that the story might interest you, so I asked her to write it up for me and here it is:

A belated note to thank you for a very fine issue in January — one that posed some provocative questions. As to the question about progressive Christian voices why we never hear them, I would just say they’re out there and they are speaking out. There are some good publications — The Other Side, Sojourners, Radical Grace, Friends Journal, Catholic Worker — that support these voices. We welcome these voices in Pilgrimage, as we do a variety of voices from all the world’s great wisdom traditions.

I read your book review of Warriors, Widows and Orphans. I can’t say that I enjoyed it, but I would like to think that I am willing to learn from past mistakes. It appears that I have made some errors in each of my chapters.

[Editor’s note: Jim Scanga called to share some thoughts he had regarding Hal Walter’s recent column, “A Regional Answer to the Food-Supply Questions.” Upon realizing that Jim had much to say on this issue, we asked him to write a letter to the magazine and he agreed. Thank you, Jim, for this thought-provoking rebuttal.]

Thousands of cattle are calved and raised in Central Colorado each year. Most are sold at auction for either breeding stock or to be finished on corn and grain products in feedlots. Regional ranchers have known for decades that trying to market their animals directly to consumers would not only be a merchandising challenge but also an inefficient enterprise considering the low volume of animals that a rancher can sell in this manner. After all, selling directly to the consumer would create a whole new business with a whole different set of problems.

YOU COULD SAY I’m living proof that good things come from being compulsive. If I hadn’t suddenly felt driven to wash the dog’s bowls, I wouldn’t have been standing at the kitchen sink at our home in Twin Lakes one afternoon last November, gazing out the window in that half-trance I sometimes sink into when I’m doing something as mind-numbing as, well, washing dishes for a dog.

The Bush Administration believes in more energy production from public lands, and thus as we went to press, the federal Bureau of Land Management had scheduled an auction of oil- and gas-drilling rights on 31,840 acres east of Fairplay.

“Water Conservation and More” is the theme of this year’s Arkansas River Water Basin Forum, scheduled for March 4-5 in Cañon City. 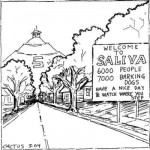 One of our favorite local theater productions is celebrating its 15th anniversary this year: the annual Son-of-a-Gunn in Gunnison.

Usually it’s a comic parody of some popular Broadway musical — past productions have included “Gunnisoon” (from “Brigadoon”) and “Alice in Gunderland” — and this year is no exception.

The Paris Mill in Park County was listed as one of Colorado’s six “most endangered places” at the annual convention of Colorado Preservation in Denver in February. The list is designed to “create awareness of and assistance for historically significant places in Colorado that are most in danger of being lost.”

The Westcliffe town board has decided that the town’s sidewalks are getting too cluttered, and plans to pass an ordinance to clear the way. Pop machines will have to go. Other private items on the public right-of-way, such as newspaper racks and planters, will have to be taken in every night. The current permanent sidewalk structures will be grandfathered, but no new ones will be allowed.

Practice may make perfect, but this wasn’t a perfect way to practice. Scott Glenn, a jailer for the Chaffee County Sheriff’s Department in Salida, was put on paid administrative leave after an inmate said Glenn used a Taser stun-gun on him during a jailer training session last fall.

The inmate, 42-year-old Thomas Montoya of Cañon City, said it happened on Oct. 17, 2003. Half a dozen sheriff’s employees were practicing the use of the stun gun. It’s a generally non-lethal weapon which sends a jolt of electricity to incapacitate a person on the business end.

If you travel out of Colorado and the people look more chubby than the folks back home, your eyes aren’t deceiving you. According to the federal government, Colorado is the thinnest state in the Union, and the West is the thinnest region of the country.

The National Center for Chronic Disease Prevention and Health reported that only 16.5% of Colorado adults were obese in 2002, lowest in the nation.

Jerry Kopel, a former state legislator, discovered something unique about the history of marriage laws in our state. Colorado was the only state where a marriage could be legal in part of the state and illegal in another. He wrote about it in the Jan. 23 edition of the Colorado Statesman, a political weekly in Denver.

Coleman’s organic beef, which began in Saguache, may have started a trend that could be extended throughout the beef industry: tracking each cow from birth to slaughter. Coleman used bar codes, the new tracking system will be higher-tech.

As of late January, the snowpack in the Rio Grande Basin was 103 percent of normal. The water level in the unconfined aquifer, however, is low at 6,000 acre-feet below the 1976 level.

Alamosa sales tax revenue was up only 1.4 percent in 2003 over 2002, a stagnant situation blamed on drought and depressed agriculture. Unrelated to tax revenue, Alamosa residents will face a 10 percent hike in base water rates beginning in April, the first hike since 1990.

Back in our August edition, Ed Quillen wrote an essay about how much he didn’t like “Colorado’s Headwaters of Adventure” as a marketing slogan for Chaffee County, and along the way, he pointed out how the slogan survey conducted about a year ago was full of inappropriate and irrelevant questions.

IT’S NOT EASY being buried green, but here’s how I want it to happen:

Someone, preferably an old friend, dresses me in my oldest, softest clothes.Let’s see, how about my favorite and virtually threadbare navy blue flannel shirt and my tatty black sweat pants? If shoes seem important, hopefully they’ll go for my sheepskin bedroom slippers. Then, I’m wrapped in one of my flannel sheets.

Drought conditions in the Colorado River Basin continue. While snowpack conditions this year are better than they have been in the past 4 years, there are no strong signals that there has been significant amelioration of the drought. Early January snowpack showed some promise with the basinwide ‘pack’ getting as high as 115 percent of average by January 8. The pattern since that time has been drier than average, however. As of February 27, 2004, snowpack in the Colorado River Basin was 92 percent of average. The trend of low inflow continues. Unregulated inflow to Lake Powell in November, December, and January was only 64, 67 and 74 percent of average, respectively, while inflows at the end of February are only 50% of average. Low inflows have reduced water storage in Lake Powell to 10.5 maf, 43% of capacity.