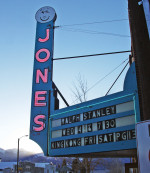 Movie theaters have been around in the U.S. since the late 1800s with the invention of the Vitascope projector by Thomas Edison. During the Great Depression, millions of Americans took refuge from economic woes in local theaters. Movie houses were big business for much of the 20th century.

Then came television, allowing families to be visually entertained in their own homes; this put a small dent in theater attendance, but the cinemas were still bringing in big bucks. The video home system (VHS) presented the next challenge to the movie houses, but a delay in the release of the VHS tapes still allowed the theaters to sustain attendance numbers.

Next was the DVD and shorter release dates for new films. The advent of DVD dispensers, such as Redbox, and high-speed internet, which led to Netflix, along with the introduction of large, high-resolution flat-screen televisions made it even easier for folks to enjoy a cinematic experience in their own homes. All of these technologies took their toll on movie houses, especially in small rural areas, where profits are based on the number of seats sold.