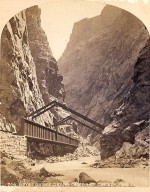 Two aggressive railroads, hastily built forts, a cannon commandeered by the legendary ‘Bat’ Masterson, gunfire, and a legal battle that raged in the courts for almost two years. This was the little known Royal Gorge War, an event that helped shape Colorado’s, as well as the nation’s transportation system.

In the late 1870s, miners converged on the Arkansas River Valley of Southern Colorado in the search for silver and lead. Feverish mining in the area led to the town of Leadville and attracted the attention of two railroads, the Denver & Rio Grande (D&RG) and the Atchison, Topeka and Santa Fe.