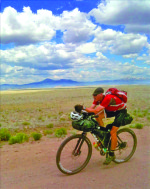 The world’s longest off-pavement cycling route is host to an annual race, the Tour Divide. It involves climbing 200,000 total vertical feet (or summiting Mount Everest from sea-level seven times). It begins in Banff, Alberta, Canada and ends in Antelope Wells, New Mexico – 2,745 miles later.
Last year, 143 riders began the race and 82 finished. Among those finishers was Kent Davidson of Salida. He took 24 days to complete the race, averaging 115 miles per day on grueling 12-hour days.
Kent, who moved to Colorado from Arkansas eight years ago, described the Tour Divide as “The most expensive free race you’ll ever do,” noting that racers don’t get even as much as a t-shirt for their Herculean efforts.