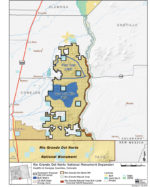 In March 2013, President Barack Obama, using executive authority under the Antiquities Act, designated 242,000 acres in Taos, New Mexico, as public lands. This area became a national monument known as the Rio Grande del Norte National Monument. As a result, the land, its rich Hispanic and Native American heritage and the wildlife habitat are protected and preserved. The monument ends right at the Colorado and New Mexico border. Some citizens in Colorado believe this designation should be expanded to include a portion of the San Luis Valley.