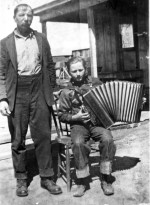 Rich Shine was born and raised in Smeltertown. His father, John Shine Sr., and his wife Doris were deeded 25 acres of farmland in Smeltertown, near CR150 and Colo. 291 in 1936 by his father, Frank Shine Sr. and his wife Frances, both immigrants from Austria. Frank Sr. worked the mines in the region and bought the land in 1909, several years after the opening of the smelting plant. The name Shine is actually derived from the Austrian name Sajn and was changed at Ellis Island upon entry to the U.S.

Frank Sr. and Frances had a daughter Frances and three sons, Frank Jr., Ralph and John Sr. who worked for the Denver and Rio Grande RR and later for the Chaffee County road and bridge department. He was also a horse trainer and farmer.