Cold Case Reopened A 35-year-old missing persons case in Salida has been reopened after new DNA testing has revealed the identity of the person missing. Beverly England disappeared on June 12, 1980 after last being seen in Riverside Park in Salida. In 1992, human bones were found at a site on Mount Shavano and were … 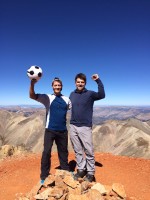 Juggling Act at 14,000 Feet On Aug.23, Paul Hower of Gunnison issued a challenge to Roberto Milk, the CEO and cofounder of NOVICA (an affiliate of National Geographic magazine that sells fairly traded products made by artisans in poor countries). The task? Juggling a soccer ball 100 times atop Colorado fourteener Redcloud Peak to raise …

Justice Sentenced Gunnison resident and talk show host David Justice has been convicted of destroying a barricade on public land administered by the BLM. He will spend a month in jail and pay $4,000 restitution. He has also been banned from all federal lands for two years. In July 2013, Justice, whose real name is …

Pirate Treasure Discovered A Western State graduate has gained worldwide notoriety after discovering what he believes is pirate treasure in Madagascar. Undersea explorer Barry Clifford (class of 1969) was part of a group of divers who claim to have discovered treasure belonging to the Scottish pirate William (Captain) Kidd. The group discovered a 50 kilogram … 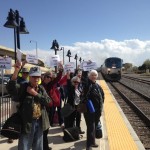 Towns Sign on to Pact A group of Colorado towns has launched a “Mountain Pact” in an effort to reform the way the Feds collect royalty payments from the coal industry, and to offset the negative effects of climate change on their communities. Signed on to the pact are Leadville, Buena Vista, Ridgway, Carbondale, Aspen, … 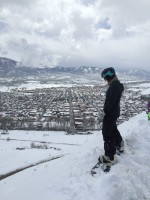 Gardner Wants to Delay Sage- Grouse Listing Freshman Colorado Senator Cory Gardner has introduced an act to delay the endangered species designation of the Gunnison Sage-grouse. His act would allow states at least six more years to implement conservation and management plans to protect the grouse without the need for federal protection. Once numbering in …

Browns Canyon Declared a National Monument Employing the Antiquities Act, President Obama named Browns Canyon a national monument on Feb. 19. The designation provides new layers of federal protection to the nearly 21,000 acres east of the Arkansas River in Chaffee County. Legislative attempts to preserve the area failed to advance through Congress, and Obama …

Browns Canyon Meeting Draws Big Crowd Approximately 500 people were in attendance for a standing-room-only meeting held in Salida Dec. 6 to discuss and listen to opinions from citizens, business owners and land-use representatives for the possible designation of the Browns Canyon Wilderness Study Area as a national monument. As Congress has continually dragged its …

Election Results The yards signs are gone, the glossy mailers no longer clog our mailboxes, the robocalls have ceased (for now) and the results are in. In one of the most expensive races on record for a U.S. Senate seat, Republican Cory Gardner (with a leg up from The Denver Post) defeated Democratic incumbent Sen. …

Police Close Case on Western Student’s Death An investigation into the death of a Western State Colorado University wrestler, Dammion Heard, whose body was found hanging in a tree east of Gunnison on April 2, has officially been closed. After conducting 45 interviews and receiving 187 pages of investigative reports, Gunnison police have determined that …

Justice for Justice? A Western Slope activist and frequent critic of the federal government has filed a motion to dismiss a case against him for allegations he destroyed federal property. David Justice of Gunnison, was indicted Aug. 13 for an incident that occurred in July 2013 when a group of 23 activists used various tools …

Mountain Tornadoes Rare but Not Unique In early June, a small but unusual tornado spun across Colorado’s South Park, damaging several homes, uprooting trees and knocking out power lines near the community of Lake George. A tornado of that magnitude would barely make the news in Oklahoma or Alabama, in what is called North America’s …

In Leadville, a $1 million grant has been awarded to St. Vincent Hospital by the Colorado Department of Local Affairs. The money will be used for repairs on the heating and ventilation system, which will cost about $2 million. There are seven patient rooms without heat because of the poor condition of the system, reports the Leadville Herald Democrat. The hospital is going after additional loans for additional facility upgrades.

The former information technology director of the Gunnison school district has pled guilty to two counts of felony theft of more than $400,000 from the district. Cannon Leatherwood faces up to 18 years on prison on the charges. Leatherwood is free on bond and sentencing is set for early June, reports the Gunnison Country Times.

Snow – and Headaches – Pile Up
Snowfall in early February has helped the region’s snowpack considerably and has caused a few headaches at the same time. At Monarch Mountain, the magical 100-inch base was reached after it snowed more than 11 feet in two weeks, creating some epic powder days. The big dumps made for dangerous avalanche conditions, with slides hitting and closing U.S. 50 on multiple occasions, blocking the Taylor River Road for 24 hours and taking out a vault restroom near Gothic. Big rigs, including a tanker, rolled off the road in Gunnison County during one of the storms; and near Kebler Pass a snowmobiler was killed when buried by an avalanche. Heavy snow collapsed the roof of the 74-year-old Sayer-McKee building in downtown Leadville after 20 inches of snow fell in one day. And the multiweek burst of moisture caused Leadville leaders to begin work on a snow removal plan. Apparently the “Cloud City” has never had a formal plan.

On Jan. 13, 2013, the United States Fish and Wildlife Service (FWS) proposed the Gunnison Sage-grouse (GUSG) for listing as endangered under the Endangered Species Act. The GUSG is only found in southwestern Colorado and southeastern Utah. The GUSG is a unique species of bird, and in 2000 became the first new North American bird species in over 100 years as recognized by the American Ornithological Union.

Big Changes at the USPS

On Feb. 23, after a five-month study, the U.S. Postal Service announced it would be consolidating 223 centers across the country sometime after May 15

In Colorado, post offices in Salida, Alamosa, Durango and Colorado Springs will be affected by the decision. What this means for Colorado Central subscribers is that the magazine (and all other mail sent from Salida for that matter) will first be re-routed to Denver for sorting and then delivered back to Salida (sounds more efficient to us, right?). Normally, locals get the magazine the next day but the new rules will add several more days to the delivery time. Our Front Range subscribers may see their copies sooner but we‘re not holding our breath.

The new Senate District 5 will include Lake, Eagle, Chaffee, Pitkin, Gunnison, Hinsdale and Delta counties. House District 60 will include Park, Custer, and Chaffee counties, and most of western Fremont County. Lake and Summit counties will join Delta, Pitkin and part of Gunnison counties in HD-61. Some state Republican politicians publicly complained the maps were redrawn to benefit the Democratic Party.

Gunnison County Commissioners filed a statement of opposition to a plan that would split the county into two separate House districts, HD-61 and HD-59.

Subdivision on the Auction Block

BUENA VISTA – The Cottonwood Meadows Subdivision in Buena Vista is going on the auction block September 30.

The subdivision has been plagued with problems since its conception by developer John Cogswell. The proposed 274-acre project called for 715 new residences and 110 acres of open space. Annexation of the land to the town of Buena Vista was approved by town council but a petition drive was launched by members of the community to put the issue to a public vote and the annexation was narrowly defeated. The subdivision application was resubmitted and approved in November 2009 and opposition to the plan resurfaced (see the January 2010 Colorado Central).

In 2010 Cogswell filed for Chapter 11 bankruptcy under Lonesome Pine Holdings, LLC. On Aug. 23, town trustees approved a motion to disconnect the development from the town.

The subdivision will be divided into parcels for the auction.

LEADVILLE – A 200-pound black bear wandered into a campground full of bow hunters and attacked a teenage boy in his tent on July 15.

Thirteen-year-old Rick Voss was asleep at the Quail Mountain Recreation Area near Leadville when he was grabbed and bitten by the bear. Voss was camping as part of the Colorado Bow Hunters Association Jamboree. He was treated for deep bite injuries at St. Vincent Hospital and then brought to Children’s Hospital in Aurora by his family. The bear was tracked down by Colorado Parks and Wildlife officers and killed.

WESTCLIFFE – A large fire in Custer County that began on June 12 was mostly contained by June 22 but not until burning nearly 4,440 acres and spreading into nearby Fremont County.

Nearly 650 firefighters fought the blaze, dubbed the Duckett Fire, on pubic and private lands at the base of the Sangre De Cristo mountains and was estimated to have cost $5.2 million to contain.

The fire forced the evacuation of area residents including residents of the Eagle Peak Subdivision and Maytag Ranch as well as the Rainbow Trail Lutheran Camp. At its peak, crews fighting the blaze included four helicopters, one airplane, 36 engines and six bulldozers. The fire, which began on U.S. Forest Service land southwest of the Rainbow Camp, is suspected to have been caused by human activity, possibly an unattended campfire, according to The Wet Mountain Tribune.

No structures were damaged or destroyed by the fire and only one injury was reported, that of a firefighter who was treated and released.

LEADVILLE – The historic Tabor Grand Hotel in Leadville is facing foreclosure – by its owner.

The city of Leadville received a notice of foreclosure on the property on May 9. Marcel Arsenault claimed that the first lienholder, Superior Investment, intends to foreclose on the property. Arsenault is 100 percent owner of Superior Investment as well as 100 percent owner of Capital Solutions which owns the hotel. He claims the building continues to operate at a deficit, according to the Leadville Herald-Democrat.

Completed in 1884 and opened in July 1885, the hotel was renamed the Hotel Kitchen in 1887 after being purchased by the Kitchen brothers, according to the Democrat. In 1892 it was again renamed, this time the Vendome, which over the years fell into disrepair and eventually closed in the 1980s. In July 1989 a section of the building collapsed after a heavy rain. It was then purchased by Arsenault, who restored the building with the aid of public funding and renamed it the Tabor Grand. There are currently about 50 residents living in the building.

BUENA VISTA – A major property developer in Buena Vista has filed for Chapter 7 bankruptcy. Dean Hiatt, who ran his business as Vista Builders filed for bankruptcy on January 28.

It is estimated he built nearly 350 homes and multiple commercial properties since the early 1990s in Buena Vista, Leadville and Salida. The company was responsible for building extensive subdivisions in Chaffee County.

BUENA VISTA- Citing current economic conditions, the Colorado Department of Correctional Facilities is putting up for sale 1,000 acres of land near the Buena Vista Correctional Facility including 640 acre feet which have an estimated value of $1,500,000 to $3,000,000.

The property was bought in parcels in the 1930’s and deeded to DOC in 1978. Since owning the property, DOC has used it for growing hay.