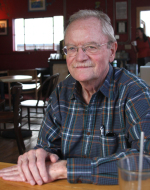 A Colorado native, Kent Haruf is the award-winning author of five novels including “Plainsong,” published in 1999, which became a national bestseller and a finalist for the National Book Award, The Los Angeles Times Book Award and The New Yorker Book Award; it won the Mountains & Plains Booksellers Award, The Midland Authors Award, The Salon.com Award and the Alex Award from the American Library Association.