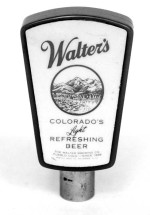 Mountains by Jane Koerner • Colorado has 637 13ers (mountains over 13,000 feet but under 14,000). • Mounts Bierstadt, Grays and Torreys are the most popular 14ers for peak baggers. • There are seven total mountain ranges in Colorado: the San Juans, the Elk Range, the Sawatch (which include the Collegiates), the Sangre de Cristos, …

The Roaring Twenties, the Charleston, and the speakeasies never happened as far as folks in the San Luis Valley could tell, but on the whole, this high valley was not dry.

In the 1920s, the agricultural economy was limping everywhere and mining was severely crippled at places like Creede; and that was before the market crashed and the mines shut down completely in 1929. As if that were not bad enough, this was the era of Prohibition. In fact, it had already begun in 1916 in some of Colorado’s cities and towns, where reformers outnumbered rugged individualists.

Thirteen shops that sell take-out alcohol were able to install or upgrade their surveillance cameras, thanks to a grant from the Colorado Division of Criminal Justice.