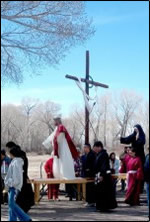 Slowly and methodically the candles on the candelabrum are extinguished one by one as the Hermanos (Brothers) recite their prayers and sing the mournful alabados (Penitente hymns) until the last of the thirteen candles is out leaving the morada (meeting place) in total darkness. Suddenly the pandemonium that ensues with the sounds of rattling chains, the staccato of the matracas (wooden noise makers), banging on tins, and the wailing brings to mind the shaking of the earth, the lightning and thunder, the fear and wailing of the people gathered around the crucifixion … and then darkness as Jesus’ mortal body releases its soul. The Penitente rite known as the tinieblas (darkness), which represents the death of Jesus on the cross, has been practiced every Good Friday evening in the moradas throughout southern Colorado and northern New Mexico for over a century, and possibly longer.

A fascinating history, unique geology and extreme recreation can all be found in the recesses of Penitente Canyon, on the western edge of the San Luis Valley in Saguache County.

Located just outside the village of La Garita, the canyon was originally know as Cañon de Rajadero (Woodsplitter Canyon),  after a pit sawmill located there in the 1800s. (This involved a person standing in a pit operating one end of a two-handled saw with another standing above the log on the other handle.) Old wagon tracks can be also found embedded in the rocks within the colorful canyon — remnants of wood gathering activity from that time period. Lumber milled in the canyon was used to build the original Catholic church in La Garita which has since burned down.